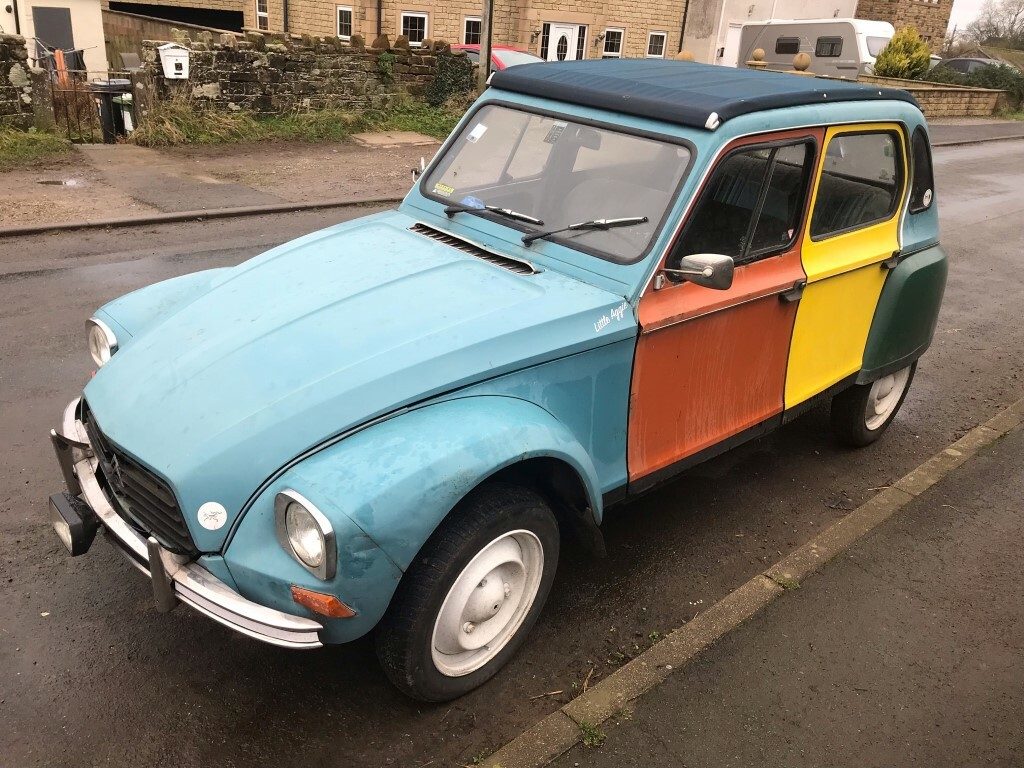 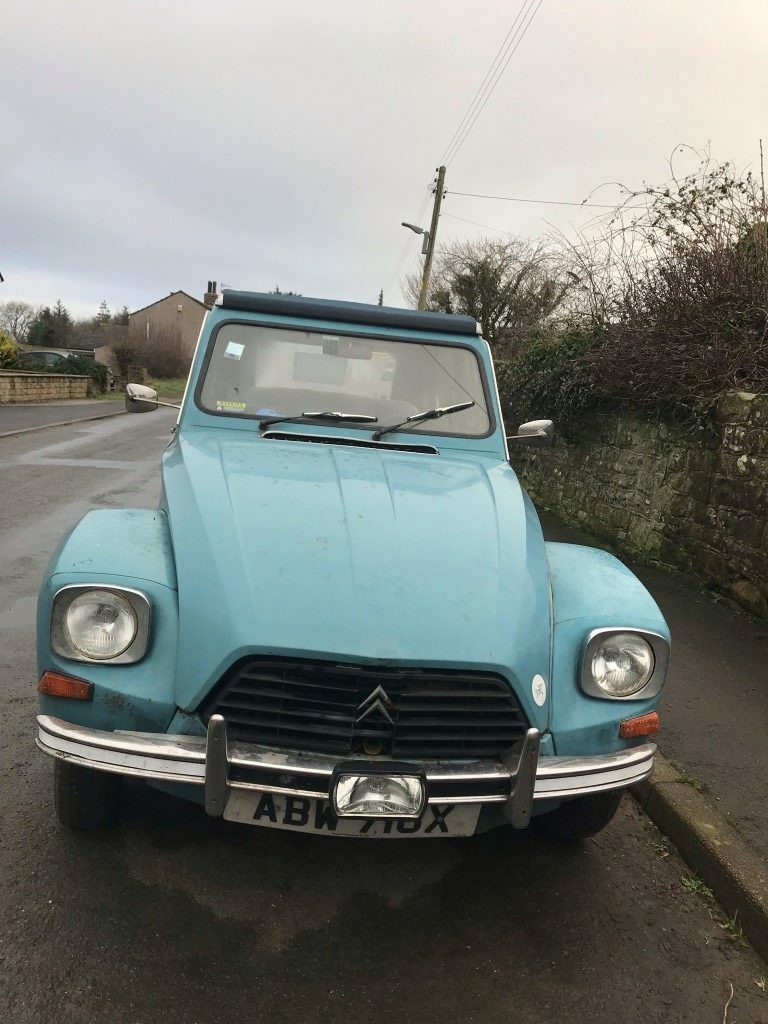 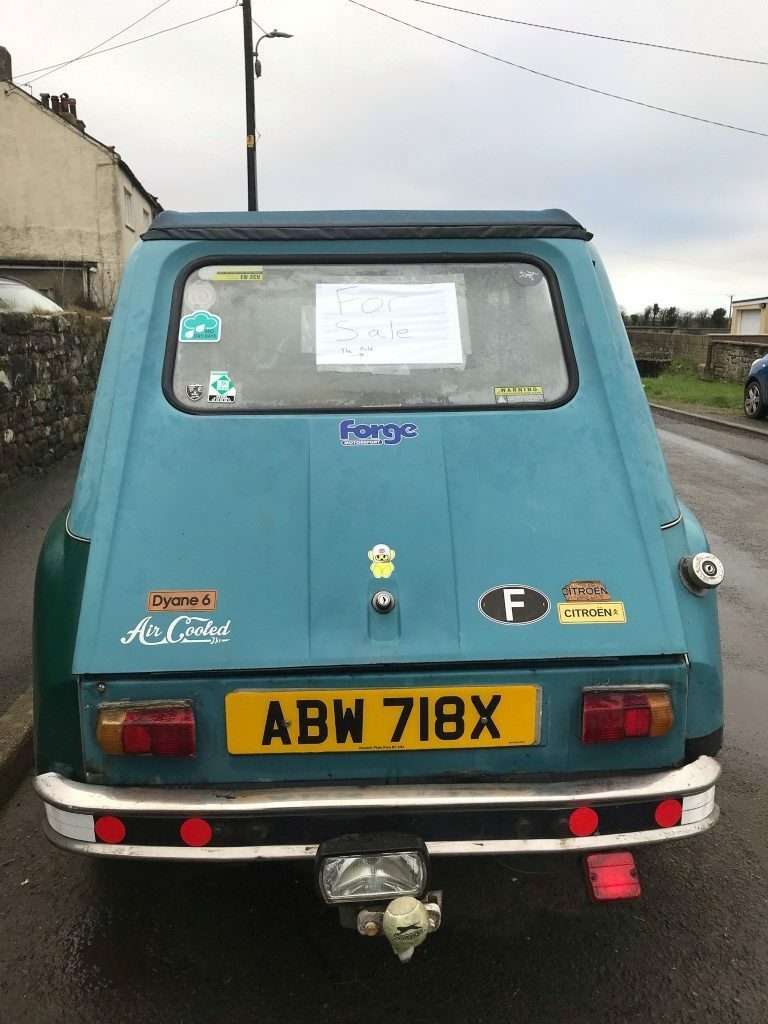 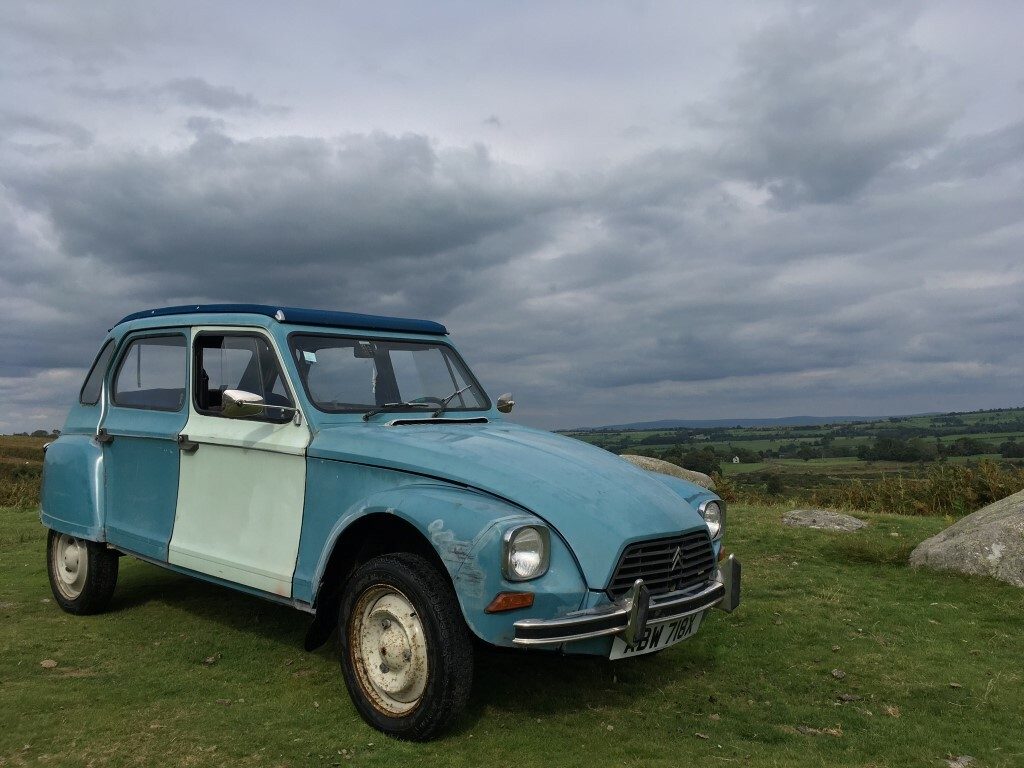 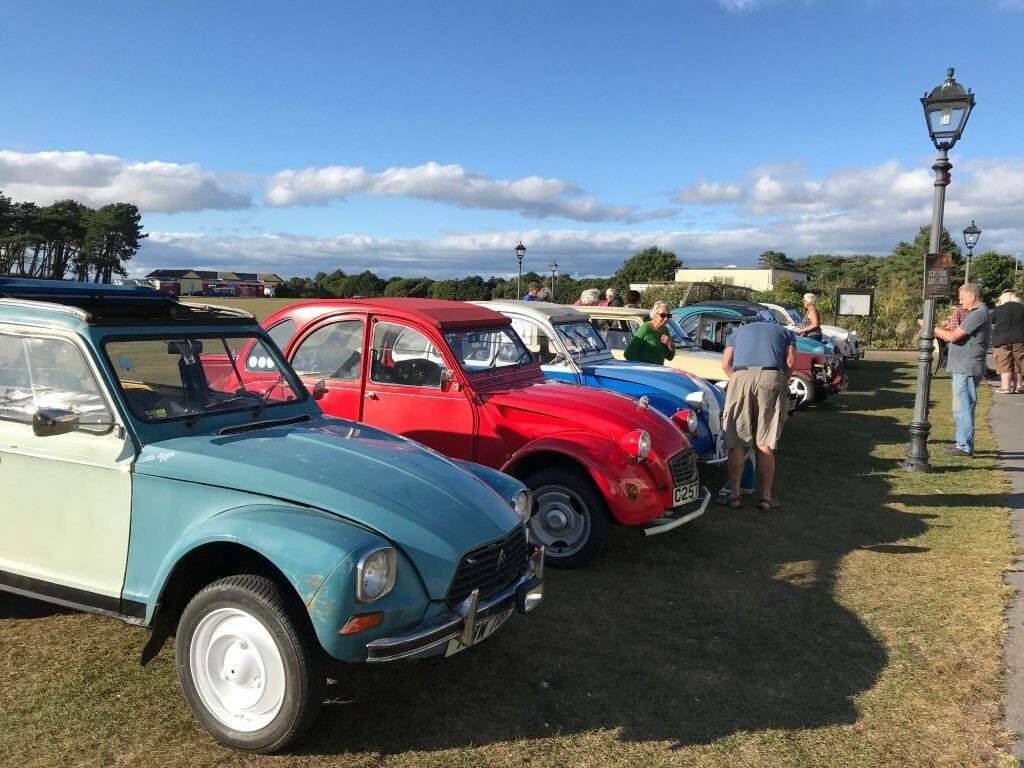 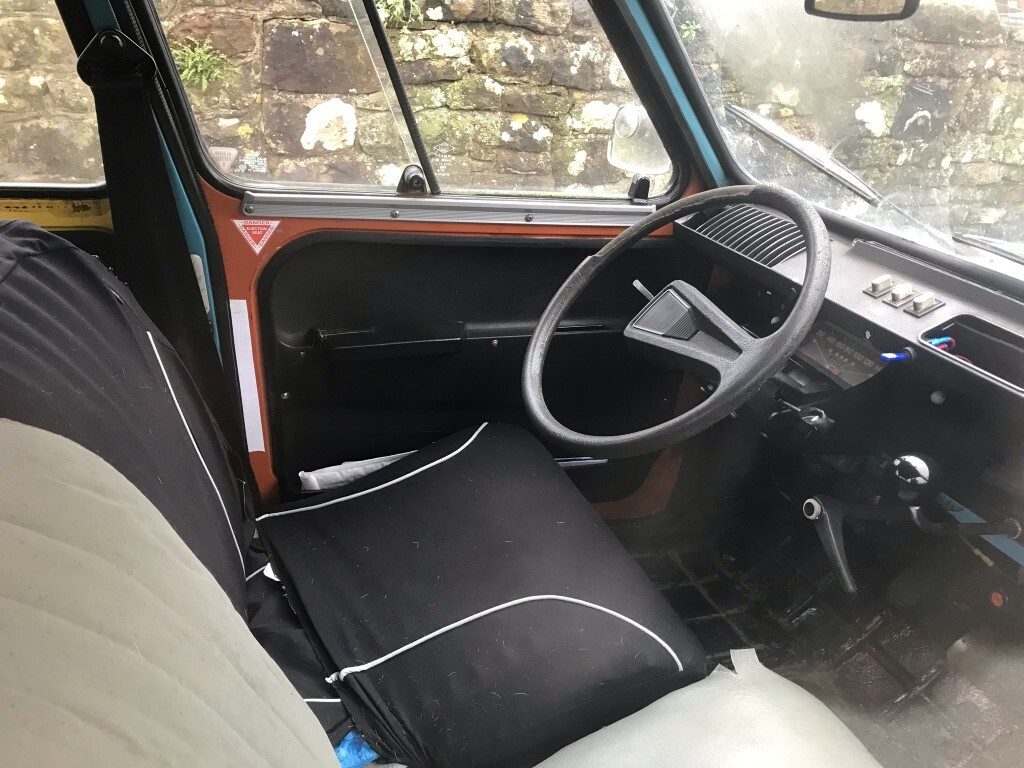 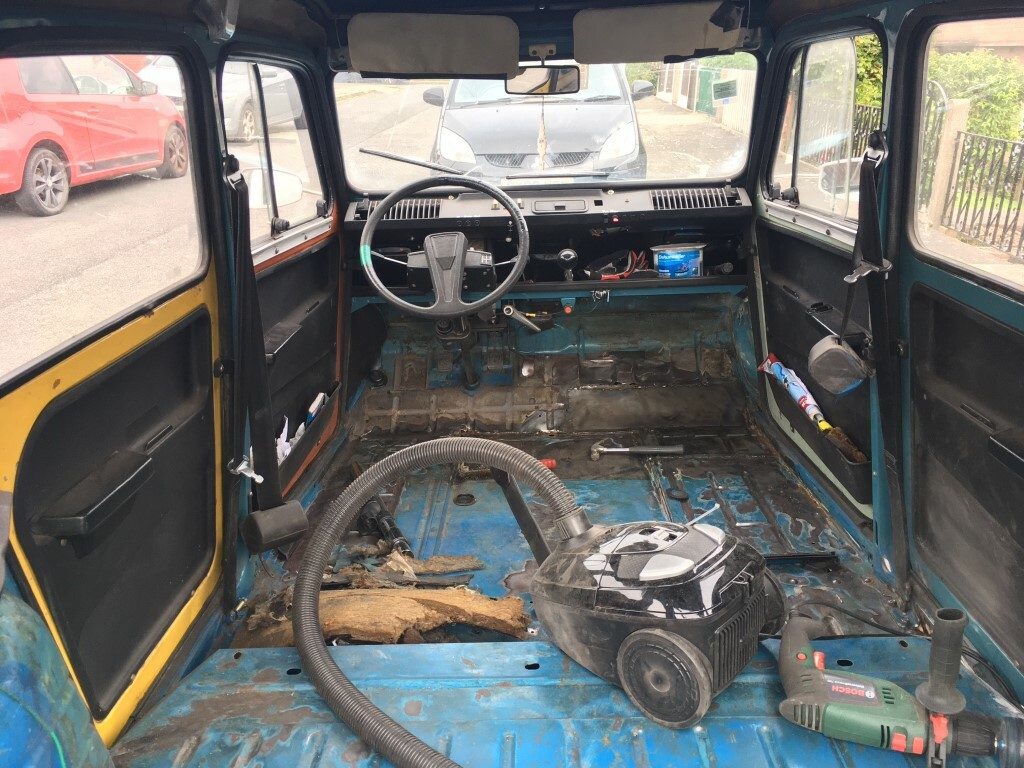 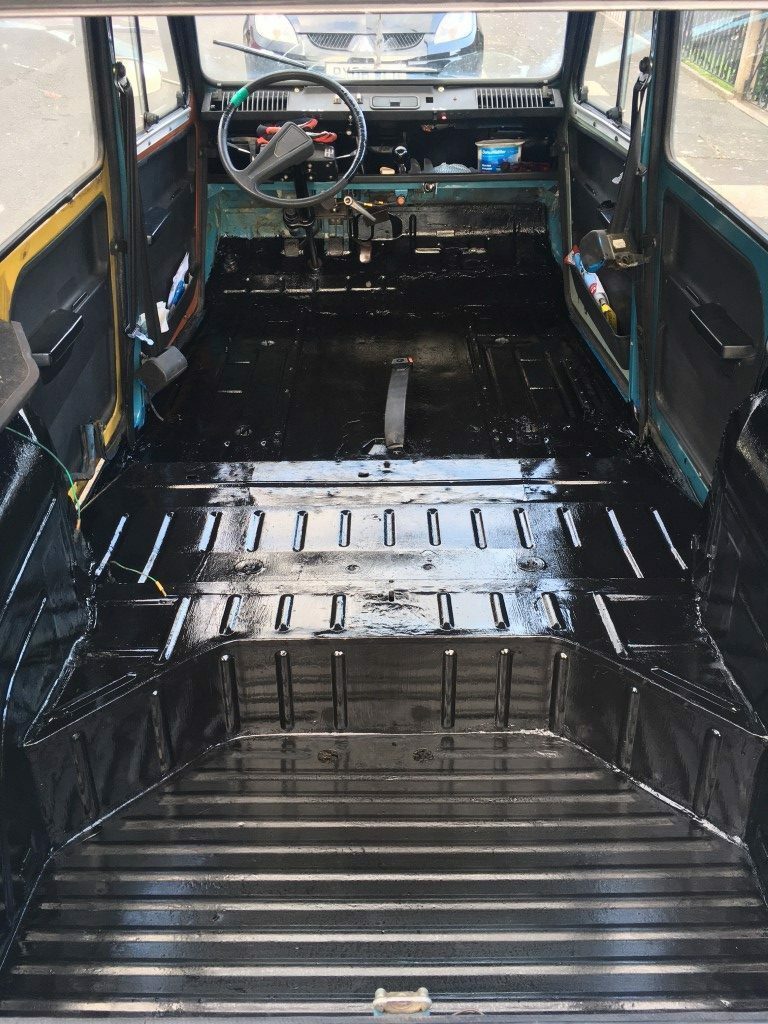 *Some photos are from last year, so I’ll update when the weather’s better and then delete this sentence.

LHD, Original French Car. Original French License Plate still underneath rear reg, but never looked closely for fear of damaging it.
Owned by French farmer and used as farmyard workhorse until purchased by the owner before me and used as a runabout from Ireland-England for a few years. Uk registered by myself March 2020.
(3 Owners Total)
The multi-coloured doors/panels are nothing to do with either of the 2 British owners. You can re-fit or repaint for around £500, but I personally think it’s part of the car’s character, and reflects her history.

Since purchasing, I’ve put in lots of work to make it my sole daily driver for an entire year. (And longer ideally, but injury prevents).
Mostly rust prevention and treatment, sanding and grinding the entire interior body shell then re-coating and painting.
(Not much rust actually, having spent near 4 decades in France)

Carburettor has been rebuilt with new jets, and oil filler/Crankcase breather has been recommissioned to sort the common leaking issues in the 2cv range.
It’s got electronic ignition replacing the points, with a recently replaced coil, Toyo 410s all round, reversing lamp and rear fog fitted along with interior fan for demising rear window, new battery, HT leads and Iridium plugs. Replacement of all bulbs and most wiring connectors after troubleshooting all circuits. Front seats rebuilt and Interior re-trimmed myself from old clothes purely for usability and hygiene reasons. (Original covers were pretty gross and completely worn through).
A whole load of extra gadgets: Rev counter, Central Front Lamp, Interior Lights, Power socket/Lighter…
And loads more bits and bobs I’m sure!

The car’s done around 12,000 km in my ownership (7,500 miles) including multiple 200mile+ road trips. No issues beyond a few age-related part replacements.
Nothing to note since passing MOT, the emissions were lower than my 90’s Catted Toyota!

Engine rebuild (Unfinished):
Cylinder barrel, piston and rings right side – Done.
The left side cylinder still needs doing, there’s no compression and the car doesn’t currently drive.
The engine is not seized, but feels tight – New Barrel, Piston, Rings and pins included in sale.
The right side cylinder head wants replacing also, (£60 ebay) as an emergency/temp repair of the spark plug thread has finally failed.
(The spark plug thread had been repaired poorly in the past)
This may even be the main culprit for the car not running, as it’s losing a lot of compression here alone.
I’d planned to fix it all myself, as the car is a joy to work on, but I’ve been battling injuries for a few years and I’m just not going to be able to any time soon.

The car was running very well until this, and has been used regularly as my daily driver for over a year.
Having already replaced the left side cylinder, after identical symptoms, I’ve basically been through this whole process before – So I’m certain it’s the same thing.
I should have got both sides done, but hindsight is always 20/20.
But to be clear, the car is not currently running, and sold as such. (Until further notice)

It’s a great thing to drive, a real car with no power steering, power Brakes, ABS or traction control. Nice throaty engine, Side-exit exhaust (Still have original but it’s not perfect).
Weighs less than 600kg, and you can notice!
I really don’t want to sell it, so rest assured it’s had everything that it’s ever needed.
It’s a bombproof little machine.
A proper car where literally anything can be fixed with a handful of parts and some sore fingers.

Turns heads everywhere it goes, no matter what mood you’re in it always puts a smile on your face as people stop and smile back.

It’s no novelty. It’s a real car that’s had real use; I really don’t want to sell it, but an ongoing back injury means I’m struggling to drive it.
It’ll sit on a motorway and give you 50mpg+, or embarrass 4x4s on dirty green lanes. Phenomenal suspension design, with inboard disc brake up front. Miles ahead of it’s time.
Complete with 2 spare wheels, one spare tyre, Spare Brake pads, Brand new battery fitted, winter grill cover (rare and important) hand crank tool to manually start, and a box of extra bits and pieces.

Serious interest please get in touch, there’s only so much I can write.
More photos available, viewing welcome but car doesn’t currently drive.

Car is sold as seen. Please read description, study the photos and ask any questions you have.
Viewing welcome and advised – But note the car doesn’t currently drive.

Cash on collection or BACS only.